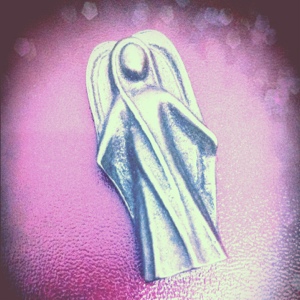 The sculpture in the picture above is a resemblance of a woman saint in Catholic’s believe. I was given this sculpture by Father Marco, a priest from Peru, who leads the community’s fight against a world’s mining giant who destroyed their land and killing their people.

In one conference I was together with him and several other community leaders from several countries, to voice our disagreement to these injustices.

At one point, I was so depressed because I heard that my friend who fought backhome against the same company was brought to jail. And even more depressed when I heard a woman worked for the company — the same national as my friend and me, said a very nasty things about him and the community who refused their lands to be polluted, poisoned, and destroyed.

When my eyes were full of tears, Father Marco handed me this tiny sculpture in my hand, and said something like, “This saint is a strong woman. You, too, have to be strong, and believe that the truth will win. This is for you. To keep you strong.”

I always keep the sculpture near. Everytime I feel down, I hold the sculpture and it reminds me about the fights that have to be fought by many communities in this world of injustices — and it make me realize how unimportant my problem was. It also reminds me to always be grateful to God for whatever She has given me.

By the way, the next day after the conference, I was informed that the woman — who said nasty thing about my friend and his community, was taken to a hospital’s emergency room. They said she got a very severe stomach ache.