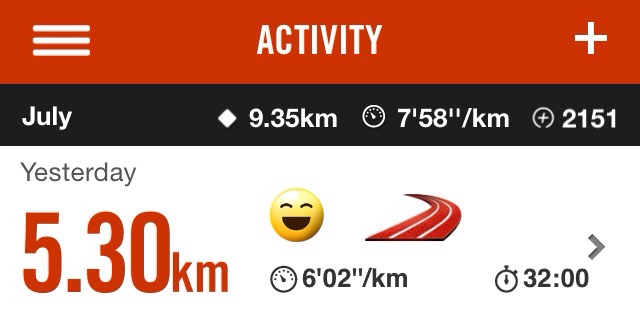 As an on/off runner I have nothing to be proud of. Since i start running more regularly in 2013 I always missed my target on the time planned. for example, I missed the target to reach my first 10k on time, although I finally reached it long time after. Thanks to my running buddies who accompany me in Senayan at that time.

One of my long-pending targets was to reach the 5k within 30 minutes. It means I have to be able to run as fast as 6 minutes per kilometer (or runners usually say it as “pace 6”). Concerning my average pace had never moved from 8 or 7 and my on/off running habit, reaching the 5/30 seemed quite impossible for me –hence I forgot it.

Because of Ramadhan, I stopped doing the run this year during the fasting month–although last year the fasting did not stop me. But after Idul Fitri, I felt my muscles and body craved for some exercises. It is true what people say that exercises make you addicted. So, last Sunday, together with some friends from college time I did my first run after Id. I could only reached 2k that morning. Well, everything needs adjustments after hibernating for some time, including our body.

Like before, after running I felt refreshed, so I made promise to myself that I will be more committed this time. So last night, again I did my evening run. A friend from the office accompanied me. I infected him to start running, by the way. Hehehee.

So we run. He stopped after 10 rounds of the 400 meter track. I continued. I have said to myself that I won’t stop until 5k –it means at least 13 rounds. After finishing the run, I checked my running mobileapplication, and there it showed that I did 5/30!! And the last night’s run also set a new record as my fastest pace ever!